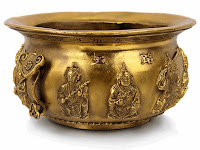 In China, during the Ming Dynasty (1368-1644), legendary Chinese businessman Shen Wansan (1330-1379) was said to have made a great fortune. How great? During his lifetime he became the wealthiest man in the Ming dynasty from a  humble beginning as a farmer. And, he was credited with founding the city of Nanjing where, through his wealth, he built one third of its protective wall.

Shen enjoyed a high profile due to his great wealth and generosity, but it was his fabled treasure bowl that keeps the legend alive. It was said that Shen's treasure bowl would fill with gold and silver overnight; from just putting in a piece of either precious metal.

With such notoriety it wasn't long before Shen piqued the curiosity of the emperor himself. The emperor commanded an audience with Shen and his wonderful bowl. He wanted a demonstration as to how the treasure bowl was able to produce handfuls of gold and silver overnight.

The following morning? Nothing. The emperor was so angry he labeled Shen a liar and ordered his treasure bowl broken to bits and the pieces buried outside The Forbidden City's Meridian Gate. As for Shen, he was sent off to the army as punishment for his deception. Whether truth or myth, even today many Chinese still believe pieces of the treasure bowl are hidden beneath the Meridian Gate.

In the world of Feng Shui, some masters might employ aggressive techniques to help a client raise their wealth energy. In my experience, the more reliable techniques are those that that help to balance one's wealth in order to live comfortably -- especially during "rainy days."  As for a treasure bowl that actually produces handfuls of gold and silver overnight, that might indeed be too much to expect in this world.

Here are some tips for maintaining healthy wealth energy based on one's Chinese zodiac birth year. Seek out an appropriate object to your sign and place it as instructed in your home or private room in your residence.


These are based on the recommendations of the famous Feng Shui master from Hong Kong, Master So. Happy treasure hunting!!!
at September 30, 2018