25. Fly Me to The Moon, Where I Might Live Forever 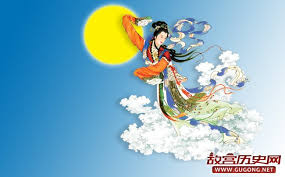 A long, long time ago, there was not only one sun and a moon in the sky. There was a total of nine suns at one time. People believed they were the children of God and were all living together in heaven. They were considered to be rather naughty because all they did was hang out in the sky together all day long. And the hot and steamy weather they created was just unbearable. The heat evaporated the rivers, dried up lands, scorched acres of planted fields; and fish and animals were dying.

Hou Yi, a skilled archer, wanted to save his people from suffering under this terrible condition. He called upon his special ability and shot his arrows into the suns. One after another he hit his targets until the last remaining sun ran off in fright and hid away at the edge of the sea.

People were thrilled when the whole world went back to where it was before. They all saw Hou as a hero and showered him with gifts, purses of money and then a big house. He found himself with a dedicated group of followers in the hundreds. Hou felt like a king and people asked his advice on many things.

As the days went by, Hou began to actually see himself as a king, but he did not spend his time ruling or taking care of his people. All he did was eat and drink, and take whatever he needed with no concern where it came from. He became extremely cold and arrogant, and made people afraid of him. He even experimented with a secret medicine that he hoped would give him eternal life.

Hou's wife Cháng é was feeling sad about the change in her husband's personality. She decided to check out what kind of medicine he was making because if Hou lived longer the people would suffer longer.

One evening, under a full moon, she quietly entered his secret room and there she found a cauldron with a fire burning underneath. She opened the lid and  through heavy steam found three little pills that were bright red. She thought this must be Hou's special medicine and she scooped them out. Just at that moment when she had the pills in her hand and was thinking about what she would do, there came the sound of footsteps.

Hou walked into the room. Startled, he demanded to know what she was doing. She panicked, popped the three pills into her mouth to hide them and slammed the lid of the cauldron shut. Hou quickly ran over to the cauldron and pulled back the lid -- no pills inside. He grabbed Cháng é's shoulders and accused her of stealing his secret medicine.

She was terrified and when she tried to speak up in her defense the three pills slid down her throat. Hou realized what was happening and he tried to force her spit out the pills. But as he started to shake her, Cháng é's body began to float up until it reached the ceiling, then out through the open window and headed towards the top of a tree. There was no way that Hou could catch her.

Becoming lighter and lighter she rose higher into the sky. Left with no other choice, Hou grabbed his bow and arrow. His first shot missed Cháng é entirely. On the second try he came to his senses and recognized that he was shooting at the woman he loved. Heart broken, he just stood in the dark and watched her float away towards the moon and then disappear entirely.

Ever since then, people always claim to see the shadow of Cháng é on the surface of a bright and clear full moon. Now, after we've landed on this cold, hard rock, we all know these are just the shadows cast by the rugged landscape on the moon. But still to this day, bakery shops print the image of Cháng é flying towards the moon on moon cake boxes.

This fairy tale about the beautiful moon is special because it also includes a secret longevity medicine. From ancient times until now, eternal life has always captivated us.

Are there any other stories about the moon that exist in Chinese mythology? Why yes, of course. Other shadows on the moon represent a palace, a big rabbit, a toad, and even a man who keeps cutting down a tree with an axe, although he never succeeds.