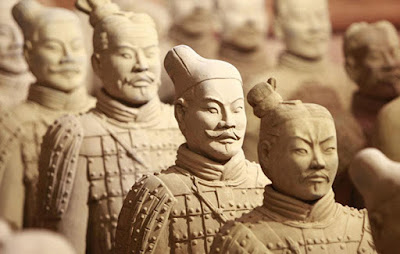 Emperor Shihuang, who ruled during the Qin Dynasty (221BC-201BC), is thought to be the leader who unified China through common language, currency and measurements.  During his era of innovation, paper was invented along with the Chinese writing pen, which is actually a brush.

Also, terrible atrocities happened during his reign: a build up of the military, book burnings and live burials of scholars who refused to share their expertise.  Shihuang is also notable for forcing indentured laborers to build China's most famous landmark, The Great Wall.

Emperor Shihuang always surrounded himself with a lot of protection. Under his brutal rule, many people suffered greatly. As a result there were many assassination attempts on his life -- none successful.

He was proud of the improvements he accomplished for the country and felt he could do even more by extending his life. The Emperor asked his alchemist Xu Fu to find a way in which he could  increase his lifespan. Xu Fu spent months and months gathering secret  prescriptions from all over, but nothing really worked. The emperor used to results was highly impatient and started  threatening Xu Fu -- if he didn't come up with any solid answers he would most likely be executed.

One day Xu Fu came to see the emperor and show him a hand drawn map of an island located in the middle of the sea. He explained that in this faraway place people were rumored to live long lives. Maybe they would share the secret if the emperor financed a sea-going expedition to find this utopia. The emperor agreed immediately, had a big boat built just for the voyage and let Xu Fu hand pick 70 young man and woman to go with him.

A few years went by as Emperor Shihuang waited for his longevity recipe from across the sea. But Xu Fu had vanished, never to return. Soon after the emperor died of old age. In his tomb he placed hundreds of terracotta warriors to protect him in the other world.  You may recall when the buried warriors were discovered a few decades ago much to the delight of archaeologists, historians and adventurers around the world.

Did Xu Fu create the myth of an island utopia as an excuse to escape certain death at the hands of the emperor?

In modern day Wakayama, Japan, there's a park which houses Xu Fu Temple. It is a memorial to the Qin Dynasty alchemist's achievements from over 2,000 years ago. This confirms that Xu Fu is not a fictional character from mythology. After he arrived in Japan, the island utopia, it is thought that he and his fellows stayed and naturalized into the society.

The mystery that remains is whether Emperor Shihuang sent Xu Fu to explore the sea outside China for building friendship and trading opportunity. Or, was the voyage actually a secret mission to discover the secret recipe for long life?