34. The Origin of Chinese New Year 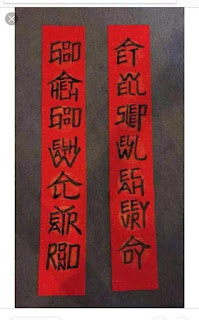 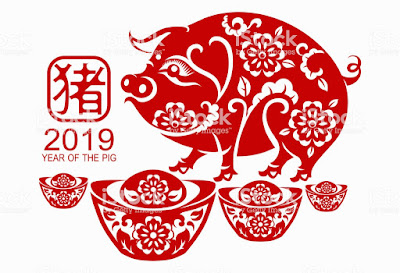 Welcome to the Year of the Boar! Here's wishing everyone's wallet is stuffed with money -- as fat as a little piggy!

You may not be hearing lot of fire crackers going off like new year's celebrations before the turn of the century (safety ordinances being what they are these days), but if you make it to any Chinatown you will be sure to see many lions dancing around with loud drums and gongs.

I always ask my American friends what else they know about the Chinese Lunar New Year celebration. Often they will make note of all the gold and red decorations in Chinese neighborhoods. And it's true, there's a lot of gold but most of the dominant color is red.

These two colors represent both wealth and luck in Chinese traditions going back thousands of years. There are red firecrackers, red and gold lanterns, couplets about spring written on red papers hung on walls, red money envelopes being exchanged, red ribbons wrapping gifts, and even people wearing red clothing during the New Year celebration.  This is because Chinese believe the color red brings about good luck and positive energy. Red is indeed the traditional color for celebrating the Chinese New Year.

The significance of red is not only important to the Chinese, but to other ethnic groups as well. Friends with Latino and Pacific Islander backgrounds have told me about painting the front door of their houses red in order to attract good luck.

Going back in time, the word "year" in the Chinese was the name of a "monster." No one knows where this monster came from or whatever happened to it, but the legend has it terrorizing the lands -- killing off livestock and consuming the entire harvest leaving communities without food  stores for the fallow winter. People would hide in their homes keeping as quiet as possible while the monster was out and about. With the monster coming back every 12 months, eventually villagers decided they had to fight back. Their survival depended on it.

During the last evening at the end of the twelve month, the day that "year" or "monster" returns, the people took to burning a lot of lamps inside their homes instead of hiding in the dark. Everyone putting on red clothing and they hung red in every corner as well as outside in front of their homes. Everyone put on red clothes thinking that it would scare the monster away.

As the dreaded monster came closer and closer to the village, they started making noises by hitting gongs and drums and throwing lit firecrackers at it. Finally the "year"/"monster" was frightened off and ran away from where it came. Elated that they succeeded in turning back the monster, villagers celebrated. And, to keep the monster from ever returning again, they decided to repeat the celebration every 12 months. Thus, the beginning of the Chinese New Year celebration.