37. The Red String of True Love 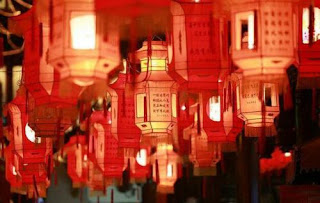 A teenager was hanging out in the market  on Lantern Festival when he saw a little old man running among the crowd and acting very peculiar. Then he observed the odd man quietly following behind people and tying a red string to their feet without them knowing it.

The teenager was so curious that he eventually sidled up to the old man and asked him what he was doing. The old man was taken aback to realize that he was being watched, but he looked into the eyes of the teenager, smiled and boasted that he's the matchmaker fairy. The one who ties young couples together with a little red string.

The teenager was highly doubtful of this claim and thought he would test the matchmaker fairy about who might become his future wife. The old man smiled and pointed across the crowd to the other side of the market. There a middle aged woman was holding a little girl in her arms as she walked among the stalls.

The teenager asked if it the child would become his bride and the fairy said yes. The young man insisted that he would prove him wrong. Without hesitation he picked up a knife and ran to the woman with the little girl. Not saying a word, he slashed the girl in the face. The woman screamed, the young man threw away the knife and then escaped without ever turning back.

After 15 years, the teenager was now of an age to find a wife. During the feudal era in China, marriages were arranged between two families. The husband would be shown a portrait of his future bride on the day they became engaged, but he would only see her face-to-face on the night of their wedding.

The man was very happy with his beautiful young wife who was perfect in every way except for a tiny scar near her left eyebrow. He asked what happened and she told him, at the age of three, she and her nanny were at the market when all of a sudden a young guy went crazy threatening people with a knife. The nanny tried to protect the child, but just as she turned to get them away the sharp blade cut into the child's face.

This is the myth about the matchmaker fairy. To this day, Chinese believe there's an invisible red string tied to their feet that connects them to their love -- no matter how far away.

For those ambitious individuals who are overly eager to make love happen for themselves no matter what, there are other ways to invigorate relationship energies. Kind of like casting a love spell or mixing up a love potion.  Could this be the right way to go about finding love for oneself?  Really. What could possibly go wrong?
at March 04, 2019