40. Significance of The Year of the Boar 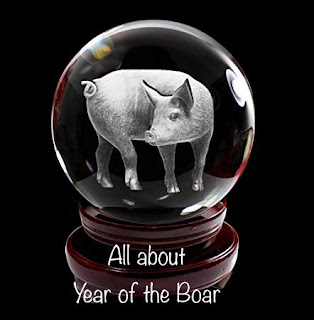 Some of you may wonder I chose to discuss the Year of the Boar now as opposed to the beginning of the Lunar New Year back in February. True, the year of Boar started on February 4th, but all the emerging energies of this new year -- good and bad -- will not be in full strength after March, which according to the Lunar Calendar is actually April. We will start to notice significant changes then. As for now, it's still not too late to prepare.

Based on the predictions of the world-renowned Feng Shui practitioner Master So, this year is what is known as a big water year.  It starts in 2019 but its influence will be felt up through 2021 for a total of three years.

Hmmmm, what does this mean?

The past three years, 2016 to 2018, were big fire years. This was good for those born in autumn and winter. It brought our energy up so that we were better while we were up and not that bad when we were low. For those born in  the summer, the energy slowed down -- for example, reaching a goal might have taken more effort and that effort may not have actually paid off.

From now on, though, what's up is down and vice versa. For those born in the summer, go ahead with what you want to achieve and start any plan you've been thinking about. Your luck energy is going into high gear and will last for the coming three years.

Conversely, if you're an autumn or winter baby, might we suggest you slow down the pace in the upcoming three years. Don't be too aggressive, be careful with risky investments, and exhibit patience in everything. This won't be easy, but, really, it's only three years. Right?

Over the last couple of years, there have been many natural disasters around the world. Unfortunately, this will still be the case and manmade disasters will also be fairly common. India and the Middle East region will be especially susceptible, but disasters will not be contained to just these areas.

For those who live in the central area of a country the Year of the Boar is a good time to develop and extend business  -- but, only those who are truly working hard will find a fruitful reward.

It certainly seems like another period full of challenges between us humans and the natural world. As well as people versus people. But let's strive to start each day with a hopeful attitude. That alone could help to shift the outlook for many of us.

Want to learn what will happen with your own birth zodiac? Follow my next post on Monday, April 1st, for a detailed forecast about each of the 12 Chinese zodiac signs
.
at March 25, 2019