45. The Ghost Living under Your Umbrella! 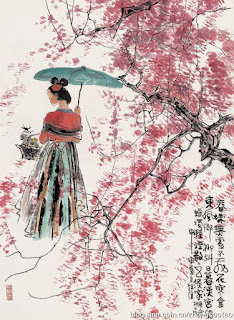 Now that we know a handkerchief given as a gift can bring about an unexpected ending, what are some of the other gifts that stirs up negative meaning or energy? Let’s consider the umbrella.

In Cantonese, the word umbrella sounds the same as separate which can indicate an ending or goodbye. I heard of a company sending out umbrellas as gifts to clients and friends. For some superstitious recipients, apparently they returned the favor with a small amount of money to signify a purchase rather than a gift.

The main superstition about umbrellas in Chinese tradition, however, is that it is a medium that connects us to those in the other world. During my childhood there were a lot of old movies from the 1950’s and 1960’s that were shown on television. A few of them had paranormal story lines which may or may not have been true. But the one thing they all had in common was that ghosts hide under umbrellas.  It’s the idea that the apparition will vaporize if exposed to the sun -- similar to vampires in western culture. So, if you want to escort a ghost from one place to another during the day, be sure to use an umbrella.

My grandma and parents never suggested that I pick an abandoned umbrella out on the street because one couldn’t be sure where it came from.  It really was and still is a taboo among the Chinese.

My mother told me about an incident when she was young. She was on her way home -- a route she had taken hundreds of times -- it was raining and all of a sudden she felt very dizzy. But she kept walking. Explaining the moment, she said how she tightly gripped the umbrella handle but it was as if she wasn’t doing the walking.  A few minutes later she came back to her senses and realized she was on a main street where she had never been before.  Right in front of her was a funeral house and a shop selling coffins.

Later she told a friend about her experience. They suggested that maybe a spirit wanted to go to the funeral house. Since it was daytime, the ghost hid under the protection of her umbrella to get to their destination.

That was a really good story from Mom. In fact, my Mom had a lot of contact with mysterious energies during her younger days. The ghost under the umbrella was one she could never forget. It turned out that the umbrella hadn’t belonged to her, but she couldn’t remember how she came to be holding it.

Be sure to know where your umbrella comes from. Want more strange umbrella stories? Stay tuned.
at April 29, 2019