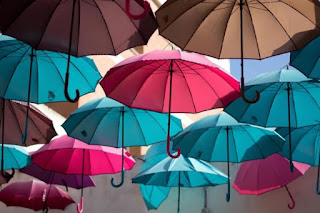 My friend Patrick is a freelance designer/illustrator for magazines and newspapers. During the day he’s running around the city from one client to the next. At night he works hard turning ideas into images in his little cabin in the country.

One day, while he was at a project briefing session, the sky suddenly turned cloudy and dark. He hadn't brought any rain wear with him since the sky had been blue when he arrived. He hung around the office hoping for a break in the pounding rain, but after an hour there was no letup. He started to worry about the tons of work waiting for him at home. Someone told him to check the storage room for an umbrella that he could take. It had been left behind over a year ago and no one ever claimed it.

By the time he made it home it was dark outside and the rain had stopped. His place was a small one room house with a separate kitchen and bathroom; the bed was placed next to a huge work desk. He placed the umbrella by a closet close to the main entrance. In a time crunch to work out his designs after the meeting, he had a little supper and then worked until 2 in the morning. Exhausted, he jumped into bed. A few minutes later he heard a strange sound in the room. Mice maybe? Then some thunder rustled outside and it was starting to rain again.

He opened his eyes a bit. A bright flash of lightning lit up the room. It was as if the lightning came into the room with a force that knocked the curtain off the wall. It tumbled onto his umbrella stand and pushed it across the room to the opposite corner. Strange indeed. Then a wind swept through the room which was even stranger since the windows and doors to the outside were all closed.

He didn’t sleep very well that night, just dozing until dawn. Again, he was awakened by another bright light. This time it was sunlight coming through the window where the curtain had fallen. The rain storm had passed and it seemed just like a dream. The umbrella was still in the opposite corner. It gave him an uncomfortable feeling -- especially when he recalled how family members from the older generation would talk about the mysteries of umbrellas. Later that day he made a point of returning the umbrella back to the storeroom of his client’s office without saying anything about it.

Was it only a dream or was it a coincidence that the thunder and lightning made the curtain fall? No matter. I will be sure to follow the traditions of my wise elders -- no strange umbrellas picked up here or there. And, be sure not to open it up inside on a nice dry day without any reason.