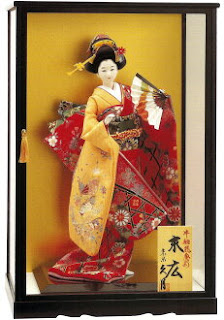 When out and about on vacation, besides sightseeing, many people love to shop for interesting objects and local products. Some bring back handicrafts, artwork and often pottery.

In Japan, there's one souvenir that many tourists seek out almost with obsession – a lovely Geisha doll. She is typically dressed in a kimono of luxurious fabric from head to toe with shiny jewelry adorning a silky wig. She might be holding an open fan or could be shielding herself with an umbrella. These are crafted with exquisite detail, usually stand about two feet tall and are encased in a glass showcase. The craftsmanship is really an art and it displays the fine techniques that are such a part of Japanese culture. How can one not bring one of these beauties home?

One of the most incredible Geisha dolls that I ever saw was in the apartment of a friend’s grandma. This was in the 1960s and they lived in Hong Kong on the third floor of a five-story building. The doll was positioned on the top of a high cupboard next to the window. Since they were facing a main street with cars and buses running by constantly, they always kept the windows on that side of the apartment closed and the blinds drawn. Every time I went for a visit, I would take a long moment to take in her charm and marvel at how real she looked.

Then one day she was gone. I was so curious. Where did they hide her? The grandma eventually explained that there had been a strange event and she told me the story.

The afternoon was cloudy and all of a sudden thunder rumbled the sky, but there was no rain yet. All at once a blinding light pierced through the window and hit the doll in the glass case and it was followed by loud thunder clap. Everyone was surprised and gathered to take a close look at the Geisha doll. She was still perched in her case, but there was a tiny hole in the glass that they were sure came from the flash through the window. And, there was also a hole the size of a penny in the window next to the doll. Somehow the doll didn’t suffer any serious damage except the decorative jewelry on her shiny wig had turned dull and dark.

This odd occurrence brought up a lot of questions for the family. Their third-floor apartment was surrounded by many high rises and very little open space. How did the lightning strike through their closed window in that congested neighborhood? How had it precisely hit the doll? And shouldn’t the doll have caught fire? Somehow, for the most part, she was unharmed.

They finally settled on the explanation that a powerful but invisible energy from outside expelled something evil that existed within the Geisha doll. The reason? The belief is that when a doll or a statue is constructed to look too human it can attract strange energies that will attach themselves. They could be good energies, but often they are mostly bad or evil. The exception would be figures that are displayed in temples.

I never saw the doll again at my friend’s grandma’s apartment.  She was gone from sight. Maybe they even threw her away.

After so many years, she lives deep in my memory. I’ve never consider buying a Geisha doll when traveling in Japan and I’ve not really not paid much attention to them in stores. Until about two decades later when I heard about another incident from a friend that involved, yes, a doll.
at May 13, 2019