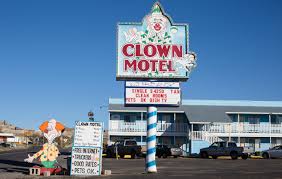 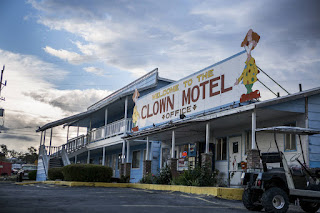 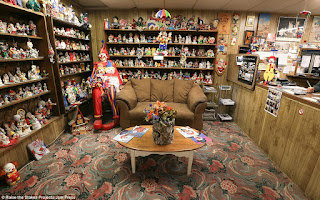 If you’re on the Nevada gambling tour traveling southward from Reno towards Las Vegas, you will likely pass through the small town of Tonopah. This quiet town of a few thousand residents boasts a famous landmark that has been drawing visitors throughout the years. Right on North Main Street sits the Clown Motel which features, you guessed it, a clown theme.

Walking through the lobby door, guests are immersed in a collection of hundreds of clown dolls with a wide variety of painted faces. All smiling, all the time, it’s up to the visitor to interpret whether the smiles are welcoming or creepy. A life-size clown sits right next to the front desk and numerous others are on display, even lined up along the wall on shelves. Too much, you may wonder? The lobby is just the beginning.

Clowns, clowns, clowns everywhere. Hanging on walls throughout the motel, a full-size face sticker on each guest room door. Just about every corner has a clown image in it so your eyes won't ever lose sight of a loopy smiling clown. And more – the view from the second-floor balcony overlooks an old graveyard across the street. Eerie for sure; not one light shines over the shadowy, ghoulish scene.

According to guests who’ve spent a night or two at the Clown Motel, strange energies have been encountered. Hmmmm … dolls moving about, odd giggling in an empty room, whispering in guests’ ears, calling out their names. Creeped out yet?
There's even a rumor that a guest witnessed the head of one life-sized clown turning all the way around, 360 degrees. Then it actually fell off its body, which the clown quickly replaced all by itself.

An unofficial explanation has to do with Tonopah’s history as a coal mining town. A dreadful explosion in the mine killed a lot of workers underground. Over a hundred years ago when the Tonopah coal mine was thriving, as many as 30,000 people lived there. Hundreds of lives were taken through a series of major accidents. A cemetery was built just outside the town to bury the dead. Then another tragedy; in the early 1900's an unknown virus took many lives again. The mines were closed for good after another explosion in 1912. Townspeople started moving out leaving behind a sleepy community with a dwindling population.

The son of a killed miner opened the Clown Motel. To memorialize his father – a big fan of clowns – he decided that clowns would be the dominant theme. Paranormal investigators were drawn to the place by the odd occurrences experienced by the guests. Dark energies were reported to be in existence and the experts attributed them to the graveyard across the street.

The cemetery had been closed down for many years and was all but abandoned. With no one visiting or taking care of it, the investigators theorized that mystery energies gathered over the course of a hundred years. And, with all those clown dolls just across the street … Remember in the last two blogs how we talked about dolls being receptacles for spirits on the other side that are compelled to express emotion in the living world?

Are you sure you would like to spend a night at the Clown Motel? Maybe you enjoy dolls with strange smiles and empty eyes. I heard the motel has been put up for sale. Better get there before it’s too late.

The ancient tradition of collecting dolls is unlikely to go away. How can one not be attracted to a facsimile of a human that retains its innocence, always has a ready smile and never gives its owner difficulty? Well, collector beware. Even though it’s only a doll, be careful not to overly engage with it, show it too much love and by all means, do not spoil your doll. It might develop otherworldly needs that you will unlikely be able to provide.